OCD
It seems there is a niche of people who want a trade site where you don't have to continuously barter with people, but rather trade for a fair, average price.

I'm thinking of utilising the backpack.tf API and clone the Add Auction page for another tab where you just insert your items and the wishlist items, in the form of metal, keys and promos, will be calculated based on the backpack.tf price.

However, this on it's own would probably cause complaints as the market could not possibly move without barter trades. So, instead of keeping it completely static, I would add a slider for the price generated for the wishlist items ranging from -15% to +15% or so - this way the trades marked as Buy Nows could still affect the market price.

Tl;dr Here's the idea in the simplest terms possible:

• Go to make a Buy it Now trade
• Put in your items
• Adjust slider to how greedy or generous you feel
• Total price generated by backpack.tf will adjust accordingly
• Keys/metal/promos complete with quantity will be put into the wishlist automatically
• Trade will be marked with "buy it now" to encourage users to not haggle with the user Totenkreuz
More or less a glorified "PRICE IS FIRM" but still would be cool to see. AHeS.hycolours | bazaar.tf
This reminds me of the Grand Exchange

Eww runescape reference =P. But it sounds like a good idea.

[quote=AHeS.hycolours | bazaar.tf] This reminds me of the Grand Exchange [/quote] Eww runescape reference =P. But it sounds like a good idea.

OCD
Here's the current work-in-progress concept of it. Ignore the shitty styling, Accell is in the middle of redoing the design. 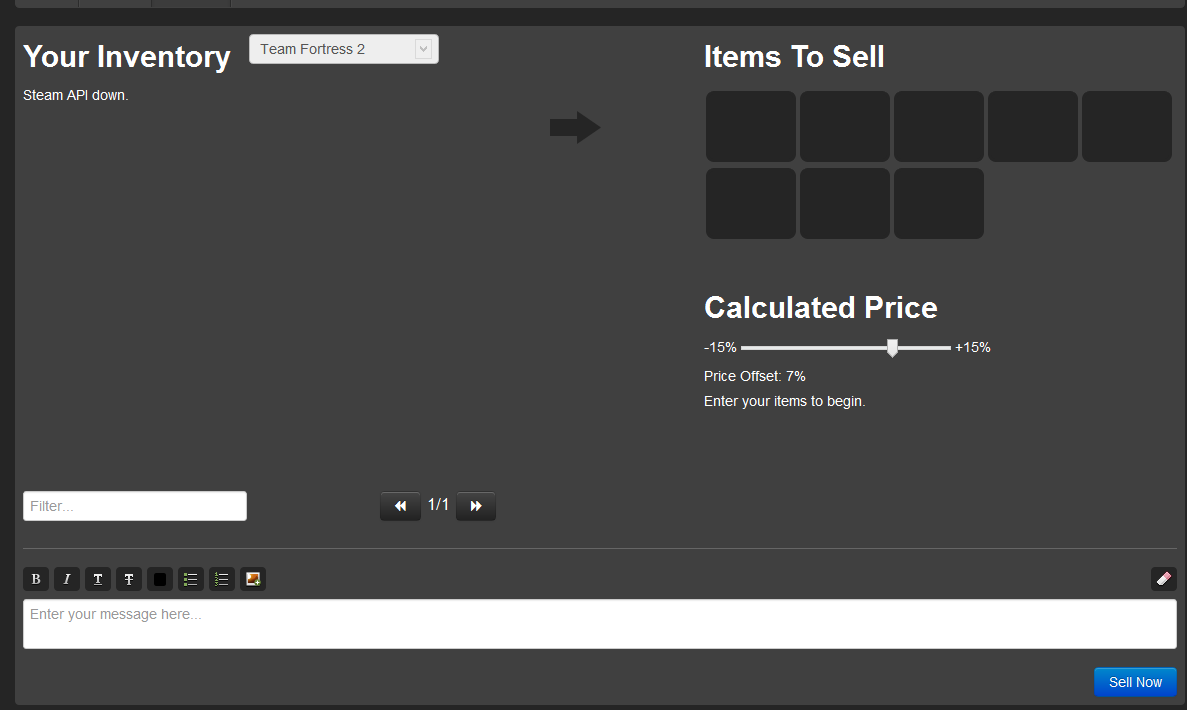 When the Steam API is working again, I'll be going further. However, you can see how pretty damn easy it will be to work with.

The calculated price will update when items are inserted or the slider is changed. andodel
Nice idea on paper, but this only furthers the "Spreadsheet is bible" mantra. Your taking away the ability for the trader to set there own price. If they want to set something at an insanely high price, then that's fine with me, so long as its in the trade section :)
Also, another notable issue is items that have just been released. If the item has no set price, then wouldn't that break the system?